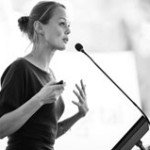 Helping the CEO of a PR Agency Present Confidently

The Problem: A nervous CEO

When the CEO of a successful City PR firm confided that she would rather run naked down the street than stand up in front of an audience, we knew we had our work cut out. She was booked on a UK trade mission to give a speech in Israel in 3 weeks and was about to cancel her flight.

BBA Solution: Intensive coaching and a much better story

We started by working out what she wanted to say.

The mental barriers she had erected made this a challenge. By making the process like the pitching that she was so successful at, we helped her build a great story with engaging anecdotes and a structure that got her messages across. We were even able to get her in front of a camera to rehearse, so we could build her confidence.

But would we ever persuade her to have more than two or three people in the room listening to her?

The Result: A new-found confident and authority

We knew we had won when, on the third day, she said: “right, I’m getting my staff in here right now to hear me”.

This was he first time she had ever done that – and was the beginning of a long and successful series of talks and speeches.

or read another case study...

Their Challenge: Improve presenting & public speaking skills at all levels. This organisation…

More about Pitching >
We use cookies on our website to give you the most relevant experience by remembering your preferences and repeat visits. By clicking “Accept All”, you consent to the use of ALL the cookies. However, you may visit "Cookie Settings" to provide a controlled consent.
Cookie SettingsAccept All
Manage consent

This website uses cookies to improve your experience while you navigate through the website. Out of these, the cookies that are categorized as necessary are stored on your browser as they are essential for the working of basic functionalities of the website. We also use third-party cookies that help us analyze and understand how you use this website. These cookies will be stored in your browser only with your consent. You also have the option to opt-out of these cookies. But opting out of some of these cookies may affect your browsing experience.
Necessary Always Enabled
Necessary cookies are absolutely essential for the website to function properly. These cookies ensure basic functionalities and security features of the website, anonymously.
Functional
Functional cookies help to perform certain functionalities like sharing the content of the website on social media platforms, collect feedbacks, and other third-party features.
Performance
Performance cookies are used to understand and analyze the key performance indexes of the website which helps in delivering a better user experience for the visitors.
Analytics
Analytical cookies are used to understand how visitors interact with the website. These cookies help provide information on metrics the number of visitors, bounce rate, traffic source, etc.
Others
Other uncategorized cookies are those that are being analyzed and have not been classified into a category as yet.
SAVE & ACCEPT